At the age of 17 years old my father joined the British army. As a sergeant, I was told he was stationed in an ammunition’s barracks in Italy during the war, and after in Egypt. (Unfortunately I have no service records to verify this.) He came to Britain from Mauritius during the late '50s where he brought over his wife, my mother, and they lived in a meagre accommodation in Ladbroke Grove, West London.  My mother was 10 years younger in age. They met through the same family circles in Port Louis, Mauritius. My mother came from a family of ten children, her being the second eldest. My father only had one sister. Their father (my grandfather on my father's side) disappeared early in their marriage. Their mother (my grandmother on my father's side) died when they were both very young. 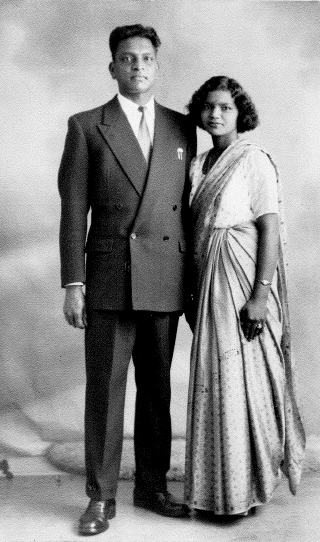 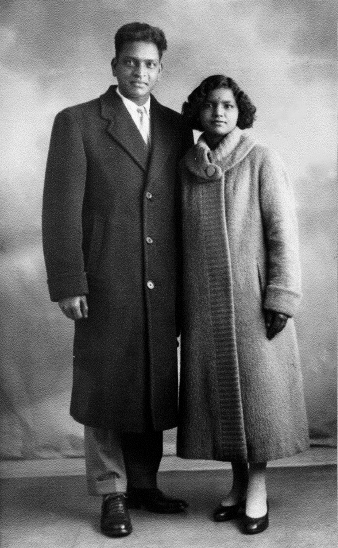 From Ladbroke Grove, my father and mother managed to buy a house in Fulham, which had been our family house until now. There they had us six children, although David, the eldest, was born when they were living in Ladbroke Grove. (In fact, my two sisters, Doris and Diana, were delivered in the Dawes Road, Fulham, house.) I was told my father initially wanted to work as a prison warden after leaving the army. Instead he ended up working as a train guard for London Transport. I remember that he mostly worked nights, while my mother looked after us at home. My father was overly strict and disciplinarian in the household, whereas my mother (during these times) seemed to be the caring one. But, by the age of nine my Dad had a stroke. It proved to be a seismic shock to our family life, and I think things changed for all of us after that.

The stroke was severe. My dad was paralysed in his left arm and leg and basically became bed-bound. Although the household had become free from his often fearful, oppressive, vice-grip, my mother, deciding that she was to support the family financially, now spent most of her days (till late nights) working as a catering assistant, first in hospitals and later in police stations. I was now 11 years old. This meant that my siblings (particularly Doris and Dennis) played a large part in my parenting and wellbeing during my later school life.

All of us, though, acted as carers for my father, who routinely needed to be fed, given his medication, helped with his everyday needs, being lifted from bed to chair, and then physically supported to the toilet. Also my father's memory had been affected, where his long term memory was intact, yet his short term memory needed continuous jogging. It seemed perfectly normal (for me anyway) to be living with my father's severe disability. During the 27 years plus of his bed-bound condition, mainly living in the confines of his bedroom, there were some happy moments spent together as a family, watching TV, playing games and sometimes chatting about family things.

Before he died, when I was in my early 30s, his condition deteriorated rapidly. He was put in a nursing home where he was treated for what seemed like a year, all the time in a morphine comatose condition. Throughout this time we all visited, sat and kept him company, individually and together, although he barely moved, let alone communicate anything to us. I remember visiting during my mother’s routine pilgrimages. She had been there hours before, just sitting, waiting and watching, and sometimes replaying the Hindi music tape permanently fixed in the tape recorder.  I would stare out of the 13th floor window. She would stare into space.

Eventually, one leg had to be amputated as bed sores had become gangrenous. His other was threatened in the same way, but in the end we thought it best to leave his body alone. It seemed that although his body was dying, my father's mind was still determined to live. We all had our private conversations that remained unanswered, no matter how much we wanted him to speak to us one last time. We hoped he could offer some final words of consolation before passing away.

Some months after his funeral, I had the opportunity to talk to a counsellor about my feelings during this time. Although I felt deeply about the loss of my father and a profound empathy for his debilitated and confined life, one of the things I had noticed about myself was that I didn't really cry. As we sat together, counsellor and I during one of our six week sessions, we decided that maybe the remorse for my father was felt earlier when he first had a stroke. The effect of my father’s condition was never really understood at the time, but maybe it did show itself through irrational, aberrant behaviour during my often turbulent and insecure teenage life.