I don't know why its taken me so long to complete, but I had started this photomontage in 2014, almost 8 years ago during a Photoshop class I was attending at the time. The task was to learn about quick selecting and layering images, but I think I took it to another dimension.
I wanted to create a modern environment around an interior design image I used as a background, but it soon developed into a contemporary vision of modern life, along with hi-tech, art, environment and science turned mod-cons and a view of a post-war wasteland (and religious hope) outside the window. Later, I had in mind characters that I wanted to inhabit the space, starting with homeless persons and the contrast and contradictions that they would create.
Much of the piece's structure had been reverently influenced by Richard Hamilton’s 1956 iconic pop-art collage ‘Just What is It That Makes Today’s Homes So Different, so Appealing?’ 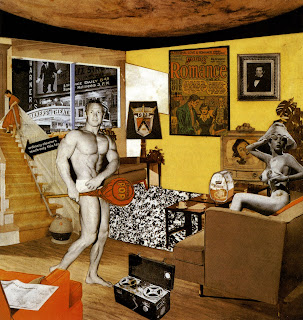 I had also come across the work of Martha Rosler and was impressed with her anti-war photomontages based on the war in Afghanistan and Iraq. 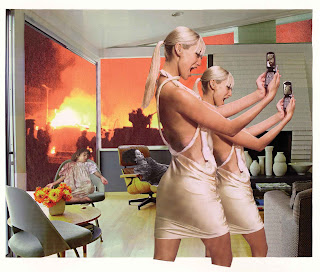 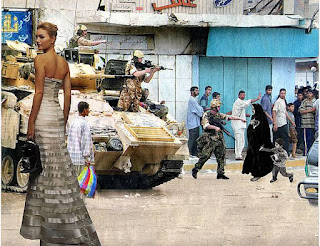 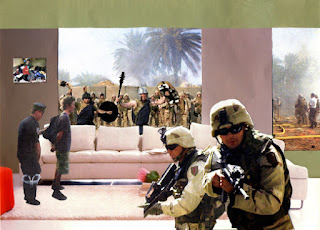 As the Youth Riots and austerity measures were still prevalent episodes in recent history, I felt it necessary to include further characters from the disenfranchised, as I thought they also had an equal claim to the constructed space. The black rectangle represents the front door in which they are both outside in the landing and lurking inside. They are not a threat to the other inhabitants, only the viewer.
I finally finished the photomontage in 2022, having kept it on hard-drives and memory sticks for most of that time. Why did it take me so long to complete? I was watching a YouTube clip on How to Paint like Willem de Kooning and it suggested that he would start applying paint on a canvas and then leave it for a month to a year to let it grow. Maybe I am a bit like this, as everything I do (even reading a book) starts with a gust of energy, and then stops. Over time the thoughts and ideas mature. It is often the case that what should have been a short idea turns into an epically developed one. However, in this instance and with this piece it might have suffered from losing its contemporary edge because of it.
Labels: Art & Design 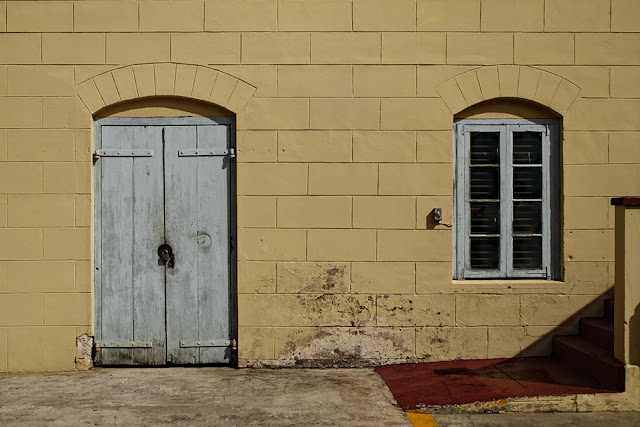